MONDAY RANDOM - THE LAW TO PROTECT OR TO PREY! MY ORDEAL WITH KAI OFFICIALS.

July 18, 2016
The Law as I was taught, as I have always known and what it should be is meant to protect Us, Correct Us and guide Us. A state or group of people can’t be governed if there are no laws to abide by, everyone will be a victim of their own animal loose minds. Thanks to the Law for keeping us Sane in an insane world and protecting us from ourselves!
The Law is there to put Constraints on Government Powers, Protect Fundamental Human Rights, Enact Regulatory Enforcement, Ensure Civil Justice, Order and Security. 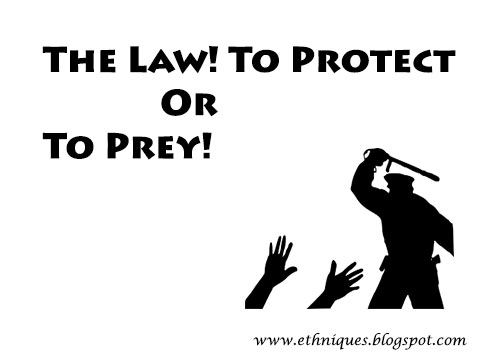 In Lagos Nigeria, the Regulatory enforcement Law is a different ball game as we have lots of Law enforcement officers who enforce Laws, dance in impunity and wallow in the state of being above the law that they themselves are supposed to enforce. I doubt that most of them even have a clear understanding of what their roles are, as soon as they put on their Uniforms, they become lords of the streets. Respects to the Very Few and Honest ones who are out there to do their jobs diligently. In Lagos Nigeria, We have the KAI, FRSC, POLICE, LAWMA, LASTMA and please add the ones that are not here.

My Ordeal with one of these law enforcement officers, KAI (Kick against indiscipline) to be precise is a funny one. It all happened at the popular Ojota area of the Lagos Ikorodu road, way before they started any form of construction there. I am an advocate of using the bridge, I see it as a form of exercise, It is safe, as Ojota Ikorodu road is a highway so why not use the bridge? Why cross a highway? Trust we Nigerians to think of the fastest possible root to the other side, If the government did not construct that bridge, we will be the first to cast stones at them. For a funny reason and for the first time ever, I decided to cross the road instead of use the bridge *Covers Face* *Law offender*. The public transport system I entered stopped me abit far from the Ojota bus stop and the thought of going to take the bridge was tiring. Enough of the excuse, I shouldn't  break the law. I saw lots of people waiting to cross and I was wondering why? So I joined them, as soon as I crossed, I realized the people who stood with me also crossed and started holding some us who were together with them, I was still wondering why, until I heard questions like "do you know it is against the law not to use the bridge? It dawed on me that these peeps where “law enforcement officers, but had no uniforms on! Then I just wished I took the cab I initially called. Some girls were crying and some were forming sick. I didn’t bulge, trust me to be composed and confident. I didn’t know why 4 of them were unto me, but one was admiring my montblanc gold wrist watch, they just sized me up and felt "She can afford to pay" pay! I felt bad for breaking the law, but I felt worse for being lured to it by the so called KAI officials who weren't with their uniforms and were pretending to also cross , but my Mum blamed me for not doing the right thing even when no eye was watching *My Bad*
This is what ensued:
KAI – You will pay for crossing the road
Me – Who are you please?
KAI - I am a government official
Me – Where is your uniform? Where is your ID card? Why did you cross the road with me, why are you catching only girls, why are you holding my hands? Do you know there is someone across the road recording this and I can accuse you of physical assault? Why did you stand on the road as a PREY waiting for people to commit an offence, instead of ensuring they do not commit that offence, you lure them into committing it?
KAI – Shey na you go school pass? We are taking you to Alausa
Me – Let's go where is your Van
KAI- What is your name? where are you from? What do you do? Are you married
Me – You will find out all that when we get to Alausa
KAI - *In Yoruba* Lets allow this one o, winch, all this oversabi lawyers, Next time you commit the offence, we will deal with you, I know your face.

I just got to the other side and zoomed off in a bike, before they realized they weren't supposed to let me go. Funny right? But these people do not even know the Law.
They arrest without their uniforms, they stand as prey and lure people to commit an offence, instead of preventing an offence, they take joy in extorting money as cheap as 500 naira from individuals which they never remit to the government, they chase street hawkers to their death, what is the essence of the law if it will kill innocent people before getting to the offenders? they also chase cars and cause accidents. The height of it is asking us to pay 90,000naira for ala. Imagine (this will be another Monday random topic).

There should be a constrain law, preventing this enforcement officials from Slapping, kicking, and manhandling Civilians, as I have witnessed KAI and FRSC official beat up people, chase people to their death and even seize goods from roadside officials then share it amongst themselves. Do we even know our Rights as individuals? What are the visible laid down rules? Lagos state is becoming inhabitable for people. Just the other day, Officials from Radio and Television came to the office to chase people out without any warrant or ID card, all we heard was "get out of here all of you, we want to lock up this place"
PLEASE LETS ABIDE BY THE RULES IF THERE ARE ANY AND SAVE OURSELVES, LETS HELP THESE OFFICERS WORK WELL, BUT THEN AGAIN CAN MEASURES BE PUT IN PLACE TO CONTROL AND TEACH THESE OFFICIALS TO VALUE HUMAN LIVES?
What other suggested ways can you think of? Have you ever been wrongfully harassed? Have you ever broken a rule before? Share your experience in the comment session.